8 Things To Do in Derry, Northern Ireland 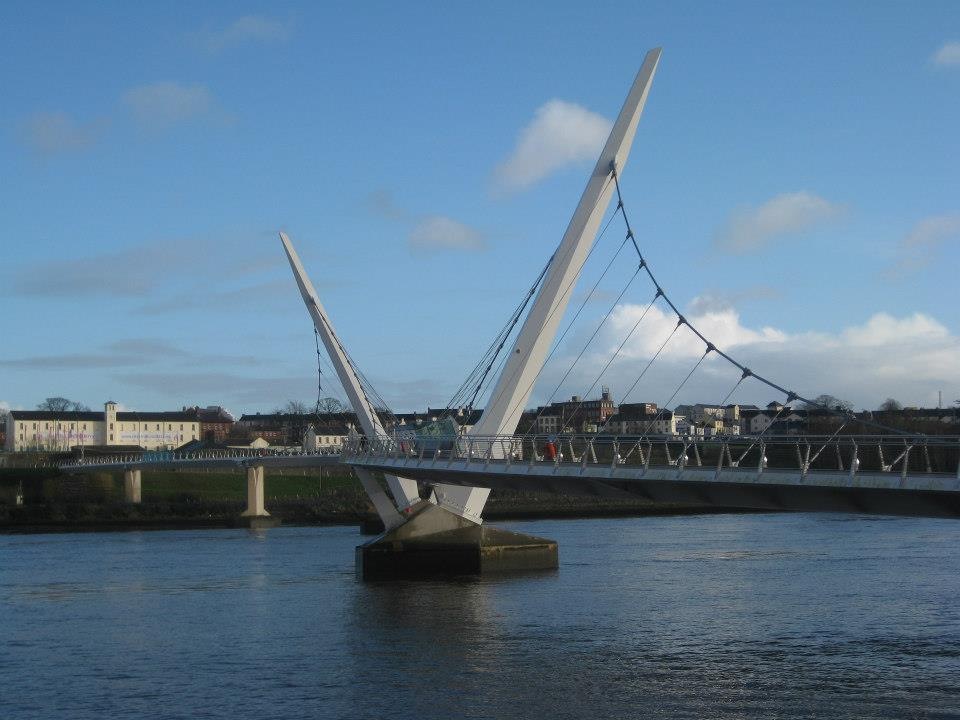 Derry is Northern Ireland’s second largest city and offers a surprising amount of things to do for visitors. Often overlooked by visitors in favour of Belfast or cities in the Republic, Londonderry / Derry’s troubled history may have hampered the city’s tourist industry in past decades.

But, Derry has come leaps and bounds in recent years. The city is now  attracting visitors with its varied history and Irish charm.

If it wasn’t for the fact that I have family in the city, which brings me here at least once a year, it is unlikely Derry would have been high up on my choice of cities. But my first visit in 2011 surprised me,. And I have continued to be fascinated by it ever since. Here’s what to do in Derry, Northern Ireland

Stroll along the River Foyle

The River Foyle runs through the heart of Derry. It’s also a great place to start exploring. Start by taking a relaxing walk along the Quayside. Don’t forget to cross over the Peace Bridge.  It opened on 25 June 2011, connecting Ebrington Square with the rest of the city centre. The bridge now symbolises the unification of a once deeply divided place.

Tour the murals in the Bogside

The murals tell the story of the most turbulent time in Derry history. Known as the Troubles, the city was deeply divided along Catholic and Protestant lines. Starting in the 1960s, the city experienced civil uprisings, riots, and violence, marking perhaps the darkest time in its history. The murals along the Bogside tell a story of life during this time, which began with Bloody Sunday.

Starting at Free Derry Corner, take a walk around the Bogside to see the murals. The picture the murals paint is a harsh one but brought to light by the artists in hopes that by examining its painful past, it can truly learn to heal.

John Caker Casey painted “Free Derry” on the side of a house on 5th January 1969. The name “Free Derry” was given to the areas of the Bogside, Creggan and Brandywell that were barricaded off from the security forces between August 1969 and July 1972.  The wall remains today as one of the most enduring symbols of the Troubles.

Around the corner from the Free Derry Museum, the Craft Village is the perfect spot to find some treasures to take home or grab some lunch.

Nestled off of Shipquay Street, the old-world vibes village, complete with a traditional-styled thatched roof cottage, features art galleries, Waterford crystal, book shops, handmade items, and souvenirs.  When you have finished shopping, stop off for some lunch at Harry’s.

Derry is known as the walled city and remains the last completely walled city in Ireland. One of the best ways to sightsee around it and learn a bit about its history is to walk the walls. Start near the Guildhall, making your way around the old city centre. Along the way, you’ll encounter views of the Bogside on one side and the fortified centre on the other.

The Tower Museum, across from the Guildhall and just inside the city walls, provides an excellent overview of local history. Explore the settlement of the city, to its growth in the 18th and 19th century, through to the Troubles that so defined the 20th.

Once you reach the top, take in the panoramic view of the city and the Foyle.

Cross the Border to Donegal

You are only right over the border from gorgeous Donegal. So make take a trip into the Republic to Derry’s neighbour county.  Buses run daily to the seaside town of Buncrana, or if you have a car, head further north to Moville or even to surf-haven Portrush.  While you are exploring, make sure to take some time out to visit the Famine Village which tells the story of old Irish life and one of the most trying times in the country’s history.

The Guildhall is perhaps the most emblematic building in the city, dominating its skyline. After being rebuilt twice, it remains at the heart of modern Derry’s culture.

Head inside for an exhibition on the history of Derry city and a look around the main hall and mayor chambers.

Have a Night Out

No trip to an Irish town would be complete without a proper night out at a traditional pub. And there’s nowhere better to spend (or start) your night that Derry institution Paeder O’Donells. Located down Waterloo Street, which features a number of traditional bars and pubs, the pub features lively music, a good atmosphere, and a top-notch pint of Guinness. If you are looking for a great meal beforehand, try the Gown Restaurant at Bishop’s Gate Hotel, high-quality food and drink with great service at a surprisingly good price!

*I’ve used Derry throughout as it’s shorter and as per Guardian editorial guidelines, please don’t read anything political into this.