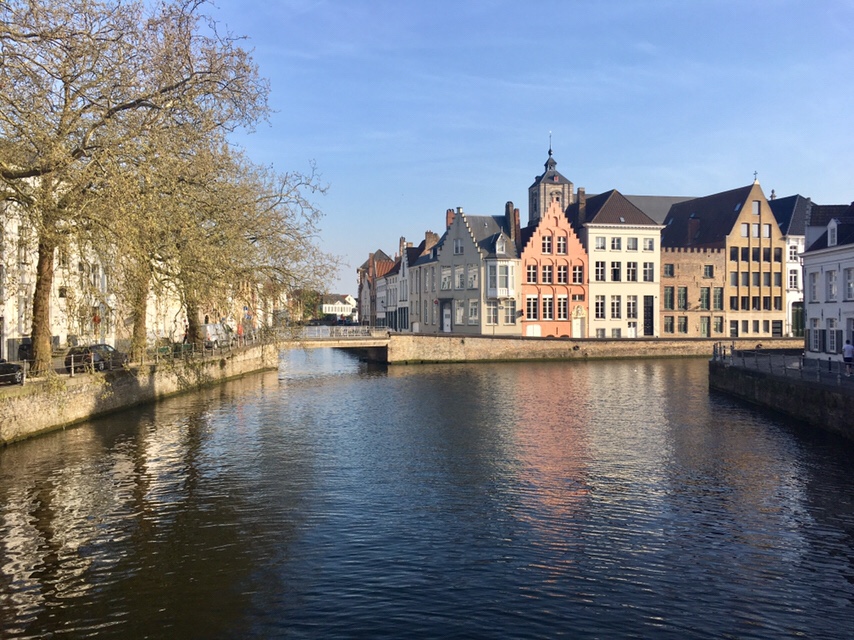 Like some visitors, I first became familiar with this little Belgian city in the film In Bruges. Luckily, I found it a lot more interesting than Colin Farrell’s character. And yes, it does have a certain fairy-tale vibe about it. Bruges is also the perfect place to spend a weekend break.

My mom and I recently stayed a long weekend in Bruges, spending a surprisingly warm and sunny time exploring, eating, and shopping. We arrived via Eurostar on a Saturday evening, and were met with the unexpected. The main square had been transformed into a live music/DJ festival while the surrounding streets hosted a funfair, a far cry from the quiet, historic reputation Bruges has earned.

But the next morning, beer cups and carnival prizes cleared away, showed the city for what it really is, a quaint, relaxing, and picturesque escape from London life.

The city is easy to get around and is the perfect place to spend a weekend in Bruges wandering cobbled streets.

How to spend the perfect weekend in Bruges

Day one – Start with an Instagram-worthy Brunch

There are some great places to brunch in Bruges, and that’s coming from a Londoner. But even better, it lacked the queues I’ve become so used to at home. We opted for the Blackbird, just across from the Jan Van Eyck statue.

The little cafe, impeccably decked out with flowers, birdcages, fairy lights, and other elements of an Instagrammer’s dreams, serves up several different breakfast options with freshly squeezed juices and hot drinks.

We went for the essential breakfast, full of pastries and bread rolls, meats and cheeses, and jams and butter.

Learn the History of Chocolate

Belgium is, of course, known for its chocolate. And Bruges features not only some of the best places to pick up sweet treats but a museum to take you through the history of chocolate. Choco-story Museum examines the use of the cacao bean and its development from a bitter drink consumed by the ancient Mayans and Aztecs to the sweet white, milk, and dark bon-bons we know today.

We visited the museum on our first morning and decided to go for the chocolate walk version of entry (€14). In addition to the museum, this option included a booklet marking places of interest with chocolate-related history, a map of high-quality chocolatiers, and three vouchers: two for samples at one of the marked shops and one for a hot chocolate at Choco Jungle Bar (just be warned: We found out the hard way that this place is not open on Mondays).

There are two main modes for taking a sightseeing tour of the city: by horse-drawn carriage or by canal boat. Ever the boat-lover (and a bit concerned for the horses in the heat), I opted to go by canal.

The tour, which will set you back €8, last about half an hour and takes you through the city’s waterways, pointing out some of its most interesting sights.

Along the way, you’ll pass the city’s grandest buildings and churches, quaint houses, and inviting pubs.

One of the best sights is that of Bruges most famed residents: its swans. The birds are in abundance in the city, and tend to hang out in the waterways of Minnewater Park.

Belgium has a number of regional dishes that are must-tries for foodies, most notably the Flemish beef stew (the country’s national dish) and mussels with fries. The beef stew is slow cooked in a beer based broth and absolutely melts in your mouth. Most of the restaurants around the Markt square serves these and other traditional dishes. We opted to try the stew at Vlaminck, just north of the square, and the food was delicious.

Bruges has a great selection of bars and pubs, many serving long lists of Belgian beer. Even if you are not a beer fan, you are almost bound to find something you like, with offering ranging from fruity and to bitter, light to dark. My mom favoured a coconut flavoured one from @ The Pub near the Markt, while I tried blonde ales and IPAs from a few of the bars and restaurants in the area.

Day 2 – Wake Up to a Signature Belgian Favourite

Apart from chocolates, what food do you typically associate with Belgium? Yes, waffles. We started our second day in the city at House of Waffles with huge Belgian waffles covered in bananas, chocolate sauce, and whipped cream. There are certainly cheaper places to get your waffle fix in the city, but it was nice as a sit down treat, and they were AMAZING.

The Belfort (or Belfry) dominates the Markt Square, standing at 83 metres tall. And for the brave, you can climb to the top to take in the views over the city. It’s 366 winding steps to the highest lookout, which also houses the 47 bells you hear chiming over the city.

Visit the Basilica of the Holy Blood

Just off the Markt is the Burg square, a beautiful space featuring buildings in a variety of architectural styles, from Gothic to Renaissance to Neo-Classicist. Today, this is still the administrative centre of Bruges. Here, you’ll find the City Hall, museums, and more.

Off to the corner is a grey, gothic-style basilica, seemingly small compared to many of the churches and cathedrals of this city.  But it holds something rather special: A phial containing cloth said to be soaked with the blood of Jesus Christ. Whether you believe it is a true relic or not, the basilica is beautiful and oddly moving.

Enjoy a scenic meal in one of Bruges squares

If you are lucky enough to be spending a weekend in Bruges during a spell of lovely weather like we were, you cannot pass up the chance to enjoy a meal al fresco. On our last night, we headed down to one of the many eateries in the Markt square and sat enjoying some food in the sunshine.

The one negative thing about visiting Bruges: The tourists love it here. After a while, dodging the tour groups and hustle and bustle of the main areas becomes exhausting. But you can

escape it. About six minutes north of the Markt, the canals become wider, and the streets quieter: the perfect place to take an after-dinner walk. In the spring, you’ll spot plenty of mother and baby ducks swimming along the canals and there’s plenty of interesting building, churches, and more to sight-see.

How to Get there

We got the Eurostar from London and then a local train to Bruges. Bruges does have its own airport, but it is small, and flight choice is limited. If you are flying in, pick Brussels and travel down by train.

Just north of the main city centre, we choose to stay in the area near Sint-Gilliskerk church at Hotel Asiris (which was super clean, quiet, and comfy). There are plenty of hotels in the region and it is a very short walk to the main sights.

Why Korčula Should Be on Your Croatia Itinerary

What to Know About Travelling by Eurostar