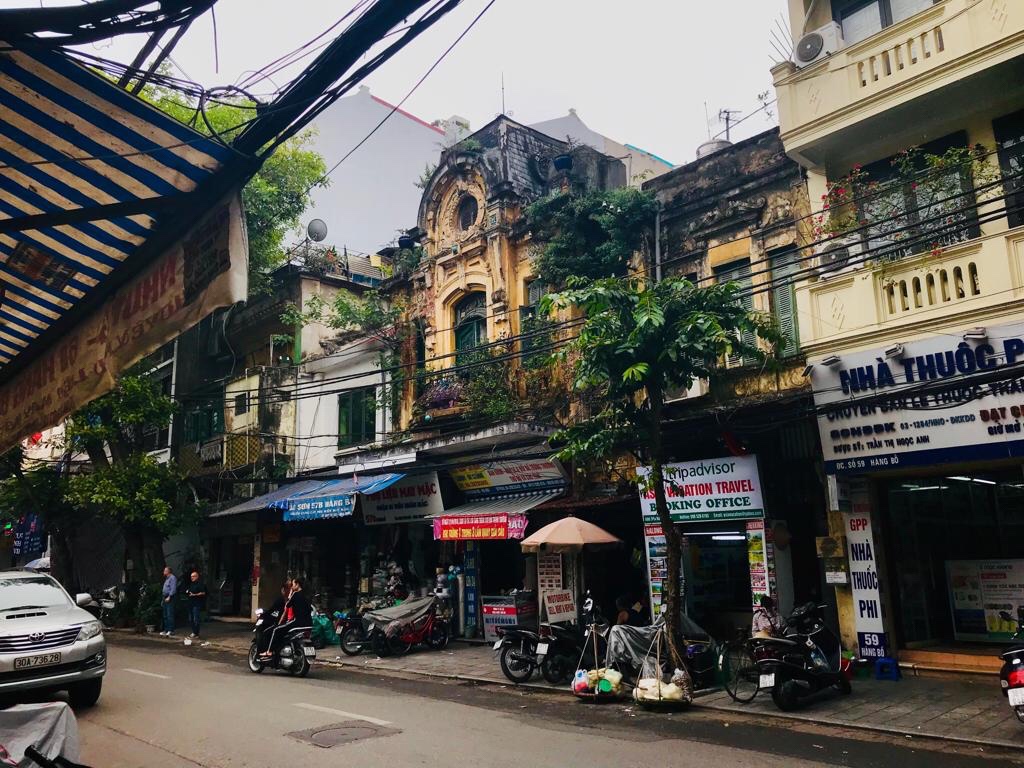 Hanoi, Vietnam’s capital city was the final destination on our tour of this unforgettable country. Located in the north of the country, the city is a mix of historic architecture and busy streets, cafes and lakes, with a touch of more modern development seeping in.

Like Ho Chi Minh City, Hanoi is very busy. Because it has an estimated population of nearly 8 million, Hanoi can be overwhelming at times. But whether it was because Hanoi came at the end of our trip and we were more acclimatised to Vietnam at this point than when we stumbled into Ho Chi Minh at 6am a few weeks prior, or there was something else about Hanoi, it won me over more than the country’s largest city.

There’s plenty to explore here. Hanoi also makes an excellent base for trips to some of the beautiful surrounding areas such as Sapa, Ha long Bay, and Ninh Binh. So I would recommend spending slightly longer here than Ho Chi Minh City. Here’s my top tips for what to see, do, and eat in Hanoi.

*Disclosure: this post contains some affiliate links, meaning, at no additional cost to you, I will earn a commission if you click through and make a purchase

The Old Quarter is the main part of the city for tourists to explore. It features traditional architecture, tons of cafes and restaurants, and a lot of places to shop. The narrow streets are busy and, of course, filled with motorcycles, but well worth exploring. Many streets bear names reflecting the traditional trades from that street, and many still specialise in those trades today.

As a result, it’s not hard to find what you are looking for. You’ll walk down a street with shop after shop to buy bags of coffee and tea. Next, you’ll turn down another filled with wat seems like an entire street of shoes. One sells mainly bamboo items, and there seems to be most of a street dedicated to sunglasses alone. And the streets get even busier at night when the market sets up. This brings me to the next must-do in Hanoi:

Of the markets we visited in Vietnam, Hanoi’s night market was my favourite. This was not just because it was the end of the trip and I knew how much room was left in my suitcase to bring back all the lovely things I found!

We came back from our evening wandering the many stalls laden with coffee filters (phin), clothes, bags, jewellery, scarves, souvenirs, and even some Jianzis after watching the locals play it in the park.

Like other markets in Vietnam, it is common to haggle a little bit. Because of this, you can often get the price down when you are buying multiple items. For more advice on the best things to buy in Vietnam, check out my guide.

Adjacent a busy main road, just past the rail station, a narrow back street has become a popular walking spot for tourists for its close encounters with  public transport. Known as the Hanoi Train Street, a working track sits in place of a road down what would otherwise be a typical Vietnamese street.

The street does have an authentic feel to it with little places to stop off for a beer and friendly locals to chat to, it’s a good way to escape the more modern parts of Hanoi nearby.

If you are going to walk here, be vigilant of the train times. The train passes at 3:30pm and 7:30pm. And make sure to get out of the way as the trains will pass extremely close and at a fairly high speed.

This prison has a long, and quite brutal, history. Most of the exhibits focus on its history as Maison Centrale, the prison used by French Colonists for political prisoners during the country’s fight for independence.

After the hustle and bustle of the Old Quarter, I was craving a bit of peace and quiet. And more importantly, to be able to walk at a normal speed without dodging motorcycles, stepping around plastic stools, etc.

Here, you’ll find tourists sightseeing mixed with locals getting fit, playing games, and socialising. They were holding an event for children while we were walking around. So while exploring, we were stopped a few times to have conversations with local kids wanting to practice their English. You’ll get this a lot if you look Western throughout Vietnam, people in general are very friendly. Local kids would often come up and say hello and practice English with us.

It takes about 15 minutes to completely circumnavigate the lake, and it’s a lovely walk. We went as the sun was going down, just as the lights were coming on.

A small island sits in the north end of the lake, reachable by the graceful, red Huc Bridge, and is home to the Ngoc Son Temple. On the south is the Tortoise Tower.

Coffee culture is a big deal in Hanoi, and you’ll find loads of great, quirky cafes.

Vietnamese coffee is strong and smooth. Along with the usual coffee drinks found throughout the country, Hanoi has a few fun drinks that are popular in the city, notably coconut coffee and egg coffee. Both are absolutely delicious!

We passed away some of the afternoon in the brightly coloured Note Coffee cafe on corner between the Old Quarter and the lake to try these coffee treats. We also treated ourselves to some absolutely delicious red velvet cake, after two weeks travelling Vietnam, the one thing I was missing was my sweet treats! The cafe is covered in post it notes with messages from its customers, both travellers and locals alike. We grabbed a table with a view of the lake and left our mark.

Besides the coffee, Hanoi has some great local dishes to tuck into after a day exploring. You’ll definitely want to try the local food while you are here.

There’s some great spots to eat in the Old Quarter. We found a particular favourite, New Day, which was a good mix of locals and tourists, reasonably priced, and great local food. The fried chicken with lime and the deep fried squid were incredible.

Make sure to have some pho while you’re in Hanoi. The noodle soup dish is apparently local to Hanoi/the North, along with the local style spring rolls. Not sure where to start? There’s plenty of street food tours you can book to try some local favourites.

Take a trip to Halong Bay or Sapa (or both!)

Many tours to these areas leave from Hanoi. You can book them in advance or through an agency when you arrive.

We chose to do an overnight cruise in Ha Long Bay which picked us up from our hotel in the Old Quarter and took us to the boat. And seeing this natural world wonder was indescribable.

We didn’t have enough time to explore Sapa (next time I hope!). But the Northern region is known for its beauty of the rice terraces, unique culture, and great places for hiking.

Many visitors to Vietnam choose to start their journey in Hanoi, flying into the international airport. A cab will cost you about $20 to the Old Quarter from Noi Bai International Airport. Or, you can use the Grab app (South East Asia’s version of Uber) for $12-15.

We chose to travel south to north and there’s a few ways you can get to Hanoi from your previous location. Sleeper trains run from Hue and Da Nang (taking about 14-15 hours from Hue). Having already taken two sleeper trains on our trip and intimidated by the long journey, we chose to fly from the airport in Hue, which took just over an hour and cost £25 (about $30), so it’s about the same price as the train, plus an extra night accommodation.

Where to stay in Hanoi

I’d highly recommend staying in the Old Quarter as you’ll be right by the night markets and tons to eat and drink. We only ventured beyond this area to visit the prison and walk near the tracks. We stayed at Antique Angel and it was great!

Unlike the southern parts of the country, Hanoi is slightly cooler and has four seasons, which was a relief after spending two weeks in the hotter parts of the country. In mid-October, it was still in the 20’s Celsius and the humidity meant my wavy hair looked like a lion’s mane for most of the time we were there.

Other tips for visiting Hanoi

Like Ho Chi Minh City, Hanoi is full of millions of motorcycles and scooters and there doesn’t seem to be much in the way of traffic laws. Be careful when crossing roads, you aren’t even safe with a green man, but also be brave and cross slowly. I’ll admit, I didn’t cross a single road without Matt, who they were much more willing to stop for. It’s a fairly safe city to visit, but instances of pick pocketing exist so do be vigilant, and like the rest of Vietnam, be wary of shortchanging, overcharging, and scams.