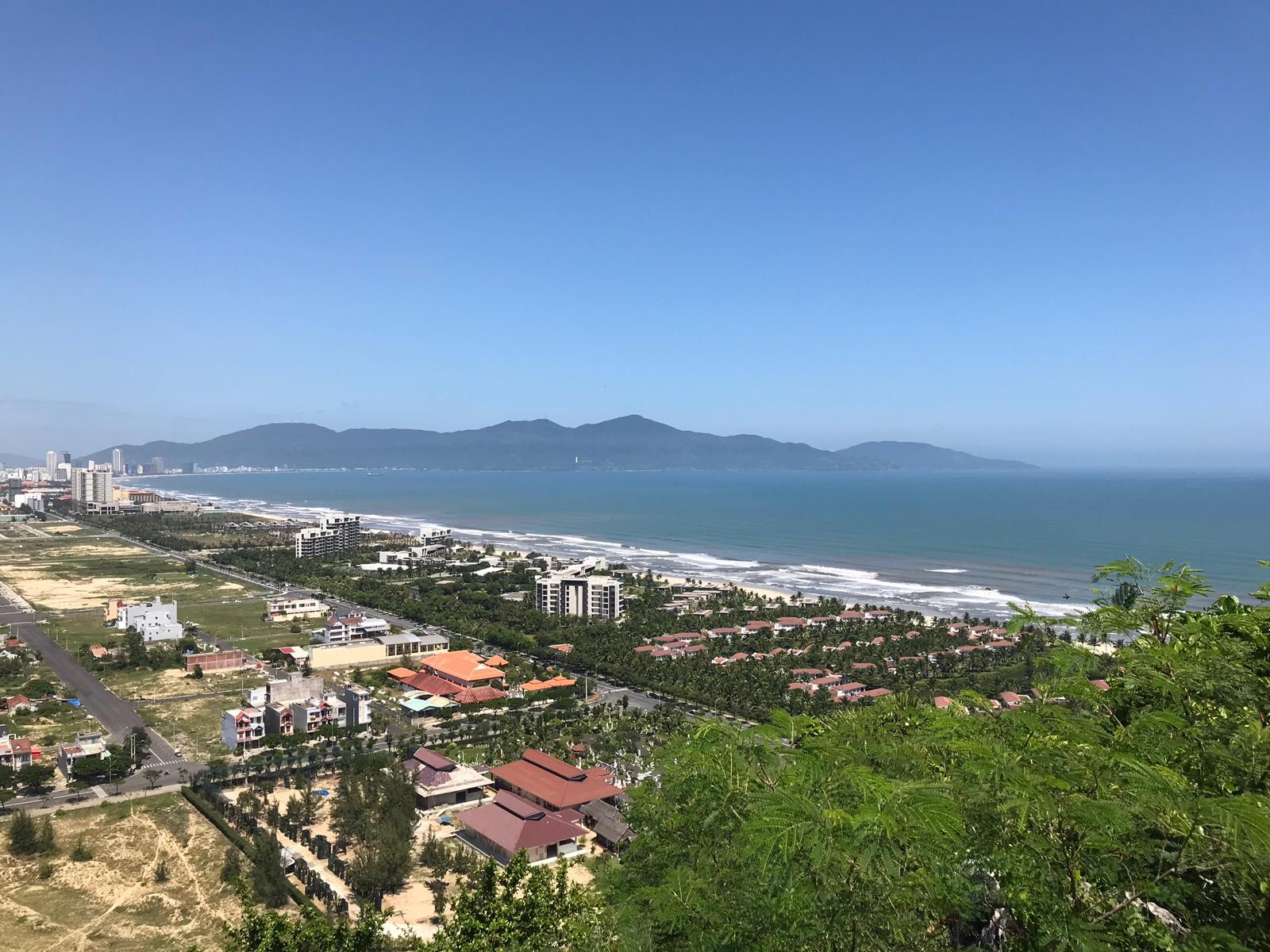 Da Nang, located in Vietnam’s central region, has become a hub for tourists flocking to its beaches and sights. A local mentioned that 20 years ago, it was a fairly small place, but recent development and tourism has grown rapidly. As the fifth largest city, it marks the half way point between Ho Chi Minh City and Hanoi.

We arrived in Da Nang after a long night on a sleeper train from Nha Trang to a rainy day, our first despite arriving in the wet season. Da Nang turned out to be a great place to kick back and relax and a good spot to start exploring the central region.

Spend a couple days taking in the sights, including some of the following in your itinerary:

Da Nang is a relatively new and fast growing city, so expect modern architecture and attractions. One thing it is becoming famous for is it’s over-the-top bridges. Take a stroll along the Han River at night to see all the bridge lighting up in a rainbow of neon colours.

Most notably is the longest, the golden Dragon Bridge, decorated with an opulent, chinese-style dragon slithering along the side of the bridge. Yes, it lights up at night, alternating between yellow, green, cyan, and blue. And if that wasn’t enough, it spits fire and water on Fridays and Saturday nights.

Sip on some craft beer

Like many parts of the world, Vietnam is jumping on the craft beer bandwagon, and Da Nang has it’s sites set on becoming the premier spot to try local brews.

One company driving this forward is 7 Bridges Brewing Company, an American-style local brewer with a bar in Da Nang’s city centre. We stop by after our evening walk along the river for a brew and stayed for several (and some much needed spicy wings). My favourite was the Yuzu IPA, it has a drinkable, fresh flavour.

You’ve probably started to see one of central Vietnam’s newest attractions cropping up on Instagram. This curving bridge supported by two stone hands sitting high in the hills overlooking a breath-taking view. The Golden Bridge, opened earlier this year, is located in the Ba Na Hills, about 45 minutes outside of Da Nang (yes, more bridges).

Now, I had very mixed feelings about our visit Ba Na Hills. We visited on a rainy day while we were travelling between Da Nang and Hoi An. I do wish I’d done slightly more research to know what to expect:

The good: To get to the Golden Bridge, we took the longest and highest non-stop cable car in the world up into the hills, above the forests and past waterfalls. It’s about a 15 minute journey and it is spectacular to see.

It was cloudy so we did miss out on the view. But the bridge look entirely mystical, rising on of the clouds, and giving an even greater impression we were standing on top of the world

The bad: Was more than the fact our view was somewhat obstructed by the rainy whether. The bridge and cable car are part of a theme park, Sun World, which personally I found inauthentic, expensive, crowded, and over-commercialised.

The little French village had some pretty buildings, but was slightly overshadowed by the park around it (playing Swiss music with advertisements for Oktoberfest). And I ended up questioning the whole time whether it was authentic and feeling a bit like I was in a Disney World version of Europe. Overall, a bit overpriced and the bridge and cable cars are the only parts really worth seeing.

The verdict: It’s a tourist trap; go if you want to see the views and your budget allows and just manage your expectations.

Relax at the beach

The area around Da Nang is home to some gorgeous beaches. A lot of them. And definitely more than we had time to visit (you can find a list of them here.)

One of the most popular is My Khe beach, a favourite with surfers and sunbathers alike. It’s also one of the most beautiful and there’s still plenty of space on white sands to spread out.

Some visitors use Da Nang as a hub to see Hoi An. However, I think this charming town deserves a few days of its own. That said, there are plenty of excursions to be had while visiting Da Nang.

The Marble Mountains, visible from the town, is a cluster of five marble and limestone hills located in Ngũ Hành Sơn District. The mountains are filled with caves and temples for exploring.

We also hiked to the top, taking in the spectacular scenery around us. Best of all, for a few moments, we were the only people up there on top of the mountain.

Da Nang is also close to popular sites in Central Vietnam. This includes Hai Van Pass, a gorgeously scenic road high in the hills, and My Son, a complex of ruined temples.

Getting to Da Nang, Vietnam

We took a sleeper train from Nha Trang (about 10 hours). You can also catch this train from Hanoi or Ho Chi Minh City. However, be aware these are very long journeys. Also check for stations in between. It’s also reachable by train or private car transfer from Hue.

How to Spend One Day in Pisa