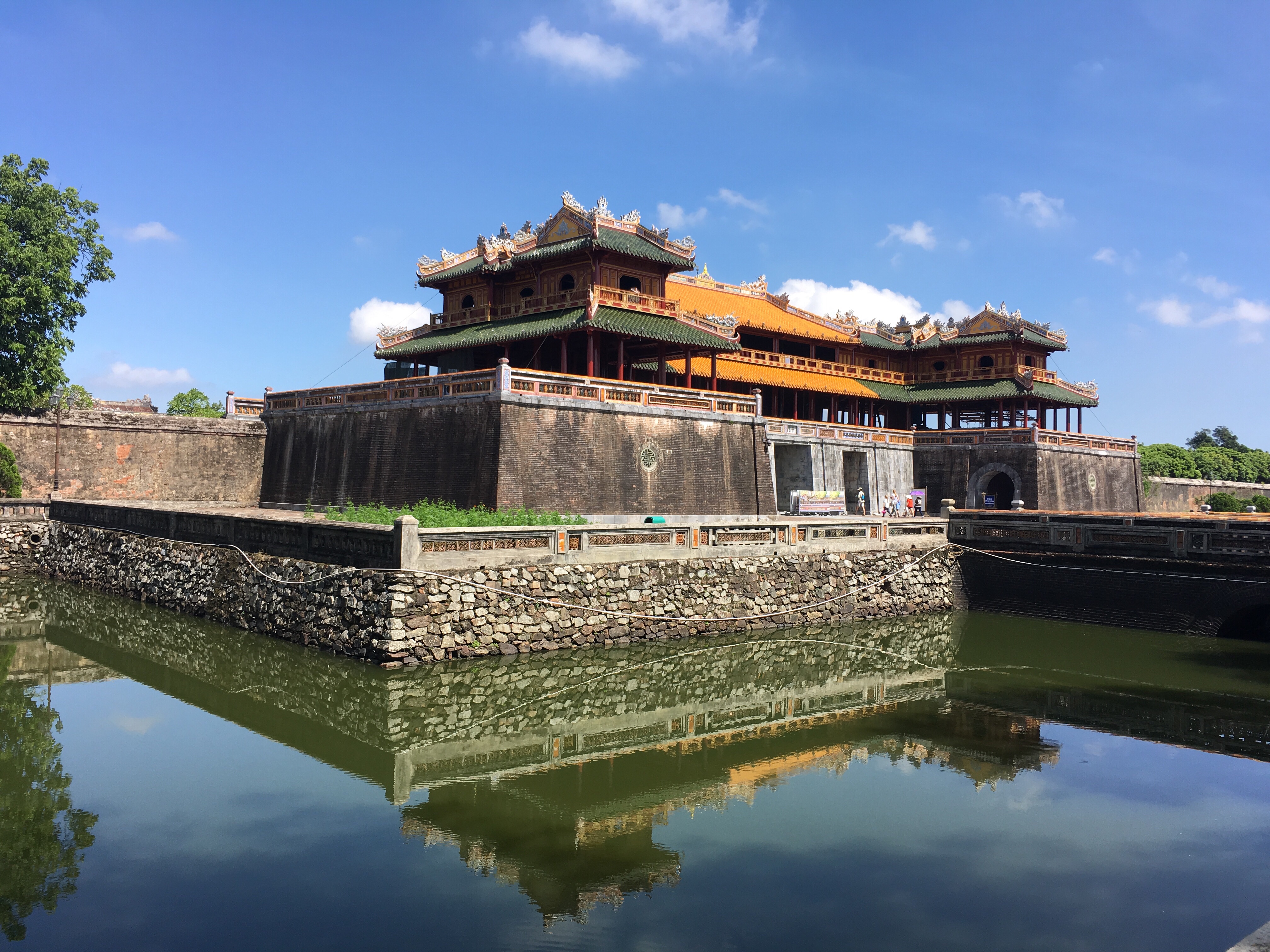 Our journey through the central region brought us north from Da Nang to Hue (pronounced hway), once the capital of Vietnam. The Imperial City is the main draw to visiting Hue, an expansive UNESCO World Heritage Site protected by walls and moats, facing the Perfume River to the south.

Once home to the country’s emperors, the Nguyen dynasty founded Hue as the capital in 1802 by .

Many buildings were destroyed during skirmishes with French forces in the 1940’s and the American War in the 1960’s. While many buildings have been painstakingly restored, the effect the war had on one of the country’s most historic places can still be felt today. You’ll notice many buildings are still under restoration even now.

*Disclosure: this post contains some affiliate links. This means, at no additional cost to you, I will earn a commission if you click through and make a purchase

What to See in Hue Imperial City

Start your visit within the citadel at the flag tower, an imposing concrete structure bearing an enormous Vietnam flag. Across from this is the ticket office where you’ll enter the Imperial City gates.

Spend some time just wandering around the corners of the city. There were a lot of tour groups and crowds in the main areas. But the gardens and other areas were empty of visitors. Besides its buildings, the city is famed for its beautiful landscaping.

Throughout the Citadel, you can visit temples, quarters of the royal family, and a theatre featuring traditional Vietnamese music and dance during showings throughout the day.

Comfortable shoes are a must; you’ll be doing a lot of walking. But I’d also recommend ones that are easy to take on and off as you’ll need to remove your shoes before going in the temples. You’ll also need to make sure to have your shoulders and legs covered if you are going inside these holy areas. This can be a challenge as it can get quite hot there (we visited in October and it was about 35C). Therefore, I recommend long shorts past the knee, loose cotton trousers, or maxi skirts. I’d also recommend a silk scarf or similar to cover your shoulders if you can’t take wearing sleeves.

If it’s sunny, definitely wear a hat. I recommend one of the traditional conical hats (nón lá). It will shade you without feeling hot and can double as a much-needed fan.

Other things to do in Hue

Visit the Pagoda of the Celestial Lady

This seven-story pagoda is located along the river Hue. The historic temple was built in 1844. Go early in the morning to beat the crowds.

Take a ride down the river

The perfume river, known locally as the Huong, runs through the centre of Hue. It is named for the flowers that grow along its banks and drop into the river in the autumn. You can take a boat tours to cruise down the river, taking in the city’s sights.

Along with other delicious Vietnamese food, you’ll find a lot of dishes local to Hue that are must-tries during your visit. These include:

I’d recommend a place not far from the Imperial City (left when facing the river) called Lac Thien. The restaurant popular with tourist and locals alike with some great local dishes and friendly staff.

Finding Your Way to Hue and the Imperial City

You can reach Hue by sleeper train along routes beginning at Hanoi and Ho Chi Minh City, and is a short train journey from Da Nang along a beautiful route that takes you through Hai Van Pass. It also has an airport with direct flights from both cities, as well as Da Lat. You can also consider a private transfer between Hoi An or Da Nang. We took a private transfer with a tour (including Hai Van Pass, Marble Mountains, My Khe beach, and Lang Co Bay) for $59.