A Foodie’s Guide to Travelling Vietnam 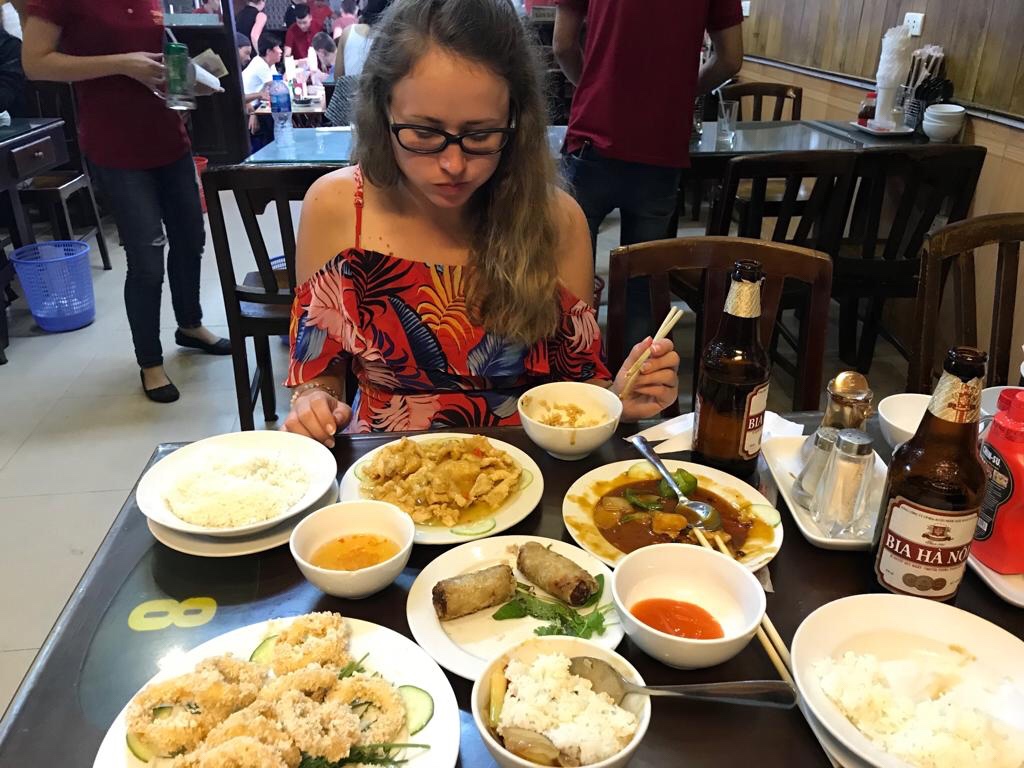 One of the most exciting things about visiting Vietnam was getting to try a bunch of new, authentic dishes. I love Vietnamese food and couldn’t wait to try it locally.

There are a lot of Vietnamese dishes to try, and the good news is that you can eat very well on the cheap in Vietnam. Typically, a banh mi or some pho will cost you around $1. Here’s a list of some Vietnamese food I loved when visiting that I’m already missing:

You are probably familiar with the Vietnamese staple, Pho, but what I didn’t know until travelling around was that each region (and even some cities!) have their own version of the fragrant, warming noodle soup.

Banh Mi might look like a typical sandwich roll, but the mix of ingredients makes this French-inspired baguette a local classic. Widely available, it features a soft baguette filled with a choice of meat, chilli sauce, salad, and coriander.

Banh xeo, or crispy Vietnamese pancakes, are thin and crepe-like, made with a rice batter, fried, and stuffed with shrimp and pork sausage (or veggie alternative), beansprouts and greens. You can find these on most menus throughout the country and are a popular dish to teach at cooking classes for tourists.

We tried these little dishes in Hoi An, but they are apparently native to Hue. Translated in English, it means waterfern cake and they are tiny steamed rice cakes topped with dried shrimps, crispy pork skin, scallion oil, and served with a dipping sauce (usually fish sauce).

Like the country’s noodle dishes, spring rolls in Vietnam can vary by region, but are usually made with rice paper and deep fried. For example, Saigon spring rolls tend to be small and bite size, while the ones in Hanoi were larger.

The best I had were veggie spring rolls in Hue, made with thin paper and were really crispy and fragrant, quite possible one of the best things I ate on the trip.

Vietnam’s coffee gains many fans among travellers. Traditionally, it is served by filtering strong coffee though a cup and saucer-shaped device (phin) that sits over a mug, and is served either hot or over ice and either black or mixed with sweetened condensed milk.

Hanoi in particular has a strong coffee culture and is home to one of the country’s most delicious varieties, egg coffee. The name doesn’t sound as appealing as the drink itself, which tastes a bit like tiramisu. Local cafes make it by placing a whipped egg yolk on top of hot coffee mixed with condensed milk. The drink is then served sprinkled with grated chocolate. Other local drinks to try include coconut latte, made with coconut milk, giving it a mildly sweet and tropical flavour.

Even Vietnam has jumped on the craft beer wagon. The country is now is fast becoming one of Asia’s hotspots to try local brews. Microbreweries in the country have evolved beyond sitting on street corners drinking questionable and weak glasses of beer in places like Hanoi. You’ll now find carefully crafted beers with unique flavours found throughout many bars in the cities.

There were some great places to try craft beers in most of the cities we visited. One of our favourites was 7 Bridges Brewery in Da Nang. The brewery’s bar had a great selection of unique IPAs and ales in an American-style space with rooftop seating overlooking the river.

Desserts in Vietnam are limited but one street food treat you’ll find throughout the country are Vietnamese donuts (banh tieu). These hollow donuts are slightly sweet and usually covered in seeds.

The fruit in Vietnam is amazing, and I definitely had my fill of mango, pineapple, dragon fruit, lychees and more. Durian is also popular but I’ve never been able to get past the smell to try it. Coconut water straight from the coconut is also popular and at about $1 per coconut. I ended up choosing this a lot to drink because it didn’t come with ice in it. A general tip for trying fruit is to avoid anything in which the flesh is eaten. If it’s been washed it could make you ill.

Admittedly I did find it challenging to find vegetarian-friendly dishes in the country. I found this slightly frustrating as I was rarely eating any meat before I left and am generally pescatarian. However, you can find restaurants that offer veggie versions of many of the local dishes. Look for chay added on, for example, pho chay, and avoid anything with fish sauce,  nước chấm)

As absolutely delicious the local food is in Vietnam, the sad truth is that many travellers do end up with some sort of stomach complaint at some point during their trip. This can happen as a result of trying too many new foods, or, more common, as a result of lower hygiene standards. Even I fell into this category at the end of my trip. Despite trying my best to avoid many of the street vendors and opt for places with good reviews that looked clean, while avoiding ice in drinks and salads. Remember not to drink the water and try to ask for drinks without ice.

What not to try

It can feel adventurous trying unique foods while in Vietnam but do be cautious. For example, don’t try something called snake wine, even if encouraged on a tour. It often contains salmonella (and honestly it just looks gross and very cruel). Also avoid anything just labelled ‘meat’, who knows what it could be. And, speaking on behalf of a friend that visited, if you try some of the local Hanoi beer on a street corner, make sure the glasses look clean. Even something like that has the potential to dampen on your holiday.

A Girls' Guide to Travel Must-haves for 2019