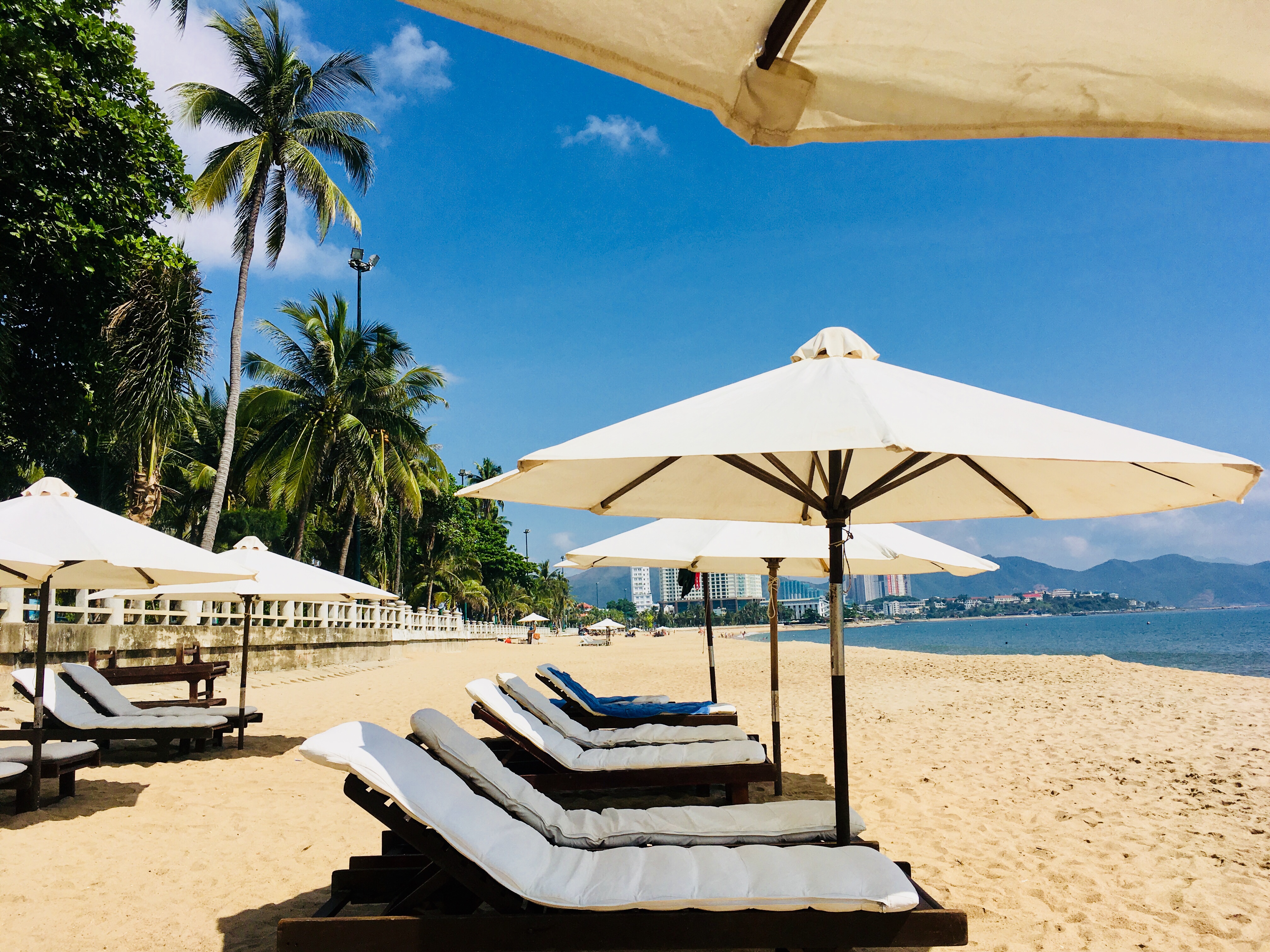 Out of the places I visited in Vietnam, I’ve found Nha Trang the hardest to write about. I realised this was not only because we spent the shortest amount of time here, but also because we didn’t do much during that time, spending most of our two days lounging at the beach.

This was purely out of choice. After all, there were two reasons it was on our itinerary. Nha Trang is located half-way between Ho Chi Minh City and the central region meaning we didn’t have to spend quite so long on a single sleeper train journey. I also wanted one destination to simply enjoy Vietnam’s beaches without the distraction of a long list of must-do’s.

And we needed it. Vietnam was a hectic, non-stop trip and as incredible as it was, it was certainly more of an adventure than a holiday.

Arriving to relax in Nha Trang

We arrived at 5:30 am, dazed after our first sleeper train adventure. After navigating some language barriers to get our next sleeper train tickets for the following night, we were slightly at a loss of where to go next. Check in for our Airbnb was at 2pm, so we set off in search of the beach. We navigated our way around the locals as they started to set up a market in the early light. The mosquitoes were vicious, and we were grumpy.

After some aimless wandering, we found the seafront and immediately I felt that familiar relaxed and at home feeling with the ocean in sight. We stopping for iced coffee (cà phê sữa đá) and some breakfast at the Sunrise Hotel. Excited, I took in the first views of the sea, an irresistible blue-green on a perfect sunny day.

I had no idea what to expect from Nha Trang’s beaches. And I’m aware that I’m very picky about beaches (growing up in the Outer Banks of North Carolina will do that to you), but I really enjoyed them. Golden sands, calm water for swimming, and maybe it was the area we were in or the fact we visited in the off season but a lack of other tourists. There were only a handful of other people nearby.

We stayed to the north end of the main beach, Tran Phu Beach. For the day, we rented loungers from the Sunrise Hotel at 100,000 for two for the day (about £3). Backpacks between the loungers, we then took turns swimming in the ocean (my first time in the Pacific), scouring the beach for sea glass, and relaxing.

I took a walk further south and it did look much more crowded and lively in this area, with a few beach bars and nearby clubs. Further north across the bridge is another beach area. It also seemed to stay fairly quiet and had good water for swimming, right across from the condo we stayed in. There’s a handful of cafes and restaurants nearby, but most of the action seems to be south of the bridge.

Not quite off the beaten track

One thing I will note is that Nha Trang has seen considerable development, meaning there are a lot of resorts in the area. This isn’t really my preference for beaches. I prefer places more off the beaten track. But the area we lounged was quiet, so I barely noticed. Some of the beaches in the central region are better picks if you are looking for somewhere less developed.

Nha Trang was great for food with some unique local restaurants. Oddly, many of the ones we tried and liked weren’t actually Vietnamese restaurants. We allowed ourselves a little break from all the pho we had in Ho Chi Minh City  I ate my favourite meal in Nha Trang at a small, waterside restaurant, Sunshine Bar and Restaurant. We had a fantastic lunch by the water of octopus dumplings, stir fry and homemade ginger ale, while making friends with the resident dachshund.

Another great find was a restaurant in a treehouse, La Velvet – a Russian run, Italian restaurant, in Vietnam in a treehouse no less. We filled up on bruschetta and salmon and blue cheese penne before our next long train.

After enjoying the sunset on the beach, our time in Nha Trang was drawing to a close. We were then faced with a dilemma. From the long day at the beach, we were salty, sandy, backpack-laden. And we still had a few hours before our midnight train to Da Nang.

Luckily the nearby spa and mud baths were still open. We decided to use it as another opportunity to relax (and get cleaned up). So we climbed into some tree stump-shaped baths that filled up with warm clay/mud and had a soak before washing off and relaxing in the steam rooms, sauna, and taking a swim in the pool. All refreshed, we made our way to the station to wait on our delayed train to Da Nang.

Other things to do in Nha Trang

I’m aware our time there was short, and many people would probably be looking for some more activities to fill their time. Other attractions in and around the resort town include:

We travelled in and out of Nha Trang by sleeper train, starting in Ho Chi Minh City and moving on to Da Nang. Nha Trang also has it’s own airport, which is served by direct flights from Hanoi and Ho Chi Minh, as well as Seoul, Hong Kong, and other regional airports.

24 Hours in Singapore – The Perfect Layover

A Day Exploring the Giant's Causeway