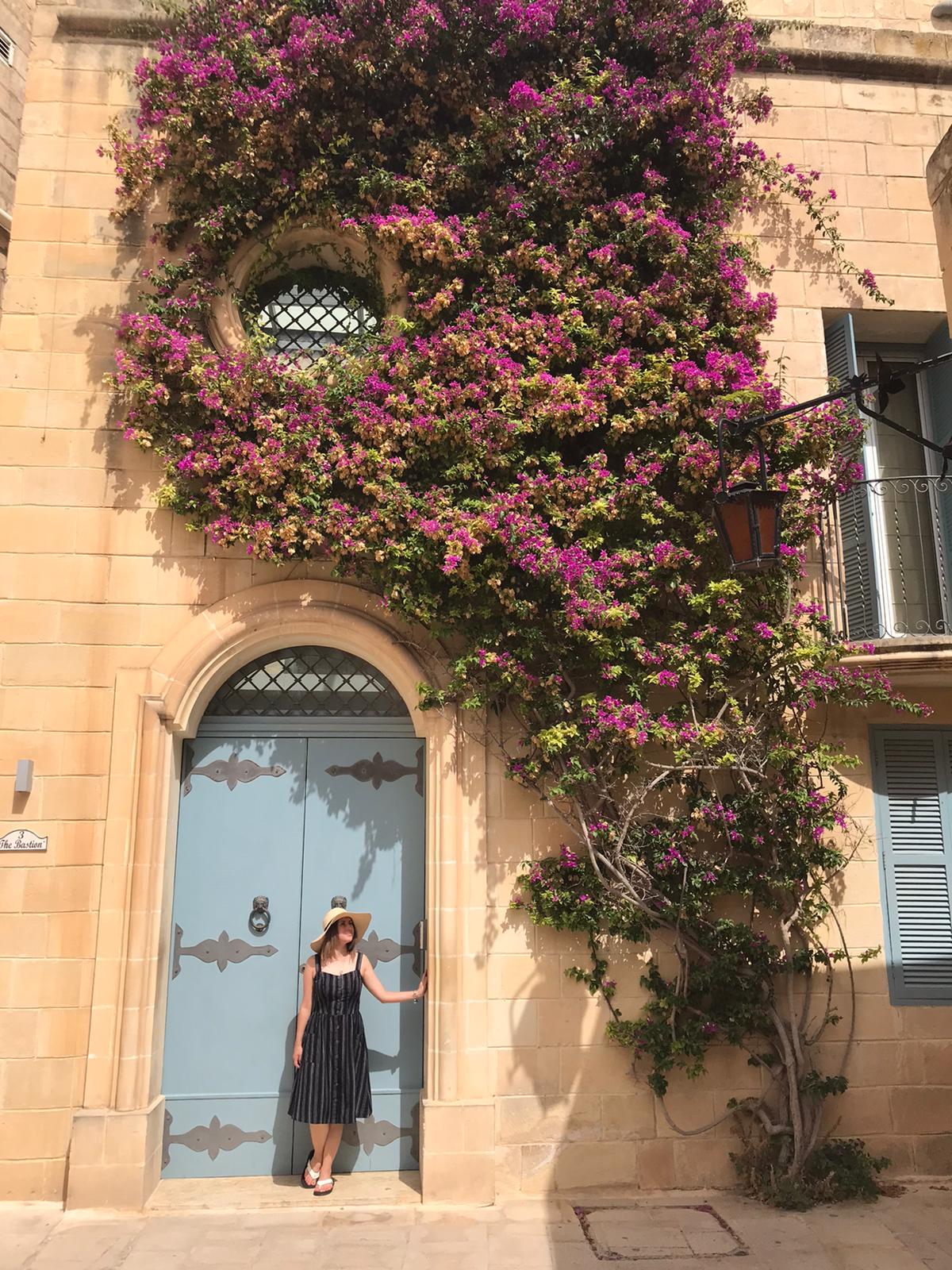 On our second morning in Valletta, we decided to take a half-day trip to Mdina, catching the 20 minute bus ride to near the city gates after breakfast. Mdina was once the capital of Malta but after the siege of Malta, the capital moved to the three cities. In the years after, it became a ghost town, earning it the nickname the ‘silent city’. But its grand ambience has remained; Malta’s noble families have long called Mdina home, earning it another nickname of the noble city.

You might spot Mdina in the distance while you travel through the rest of Malta, lit up at night by a soft lamp light glow. Located on top of a hill and fortified by walls and moats, the city is a great place to explore on a half day or full day trip from elsewhere in Malta, providing the perfect atmosphere to step back into the past. Nearby, you can reach Rabat in just five minutes, providing even more spots to explore on a day trip.

As you enter through the main gate, you might feel like you are stepping into another time. Game of Thrones used Mdina’s gates as filming location in the first season as the gates of Kings Landing. Built in the 18th century, it is also known as the Vilhena Gate.

Mdina looks like a place frozen in time. The architecture and buildings are well preserved, we couldn’t see any modern architecture. The area has been inhabited since pre-history, but the Phoenicians first fortified it. Romans and Normans both had part in the city’s fortifications. Years later, the Knights of Malta built some of the iconic baroque structures we see today after an earthquake destroyed parts of Mdina.

As you begin your journey through the city, you see St Paul’s Cathedral to the right hand side. St. Paul is the patron saint of the city and supposedly live in Mdina during 60 A.D. after his ship wrecked in Malta. The cathedral is one of the most impressive architecturally impressive buildings in the city, built in the baroque style.

The city’s narrow streets mirror the Baroque style of the main cathedral and gates and are perfect to spend the day wandering through.

Other historical spots in Mdina include:

Get some snaps of the doors of Mdina

It’s not just the buildings that are beautiful in this city, even the doors are pretty.

One door in particular has gained some Instagram fame. This iconic blue door, covered with a creeping purple-flowering tree, is hidden from view along the main routes. As a result, we were the only people around when we visited. To find this beautiful door, head to the last square in the city. In front of you, the walls look out over a wide view of Malta’s countryside all the way to the sea.

Then, to your left, you’ll see a building with a vibrant red door and matching shutters.

Go around to the right and follow to a small, quiet square where you’ll find the picture perfect door.

But this isn’t the only prettily painted door with well chosen foliage you’ll want to whip out your camera for. Turn down the peaceful little streets and you’ll find shades of green, red, blue and more flanked by flowering trees.

Nearby, you can find other locations used in the first season. This includes Mesquita Square, which you’ll find hidden among Mdina’s narrow streets. The square featured in Season 1, Episode 5 as the spot where Jamie and Ned fought outside Littlefinger’s brothel.

Outside the city, St. Dominic’s Priory served as the filming location for the Red Keep’s gardens, including Season 1 Episode 7 where Cersei utters one of the most famous lines in the series “When you play the Game of Thrones, you win or you die”. You can reach the priory by a short bus ride, but when we were there, the buses were on diversion. We decided to walk, dodging the road works as we went.

There’s not a lot else around it, located in a residential area. The Priory was closed when we arrived, closing everyday from 1:30 to 4pm. It’s a little known spot and there were no other tourists there. We sat down on a bench opposite to rest and when we turned to walk back, we were lucky that a priest opened the doors and let us come in for a few minutes.

Like the rest of Malta, you can get to Mdina easily from most places thanks to its well connected bus route. Malta Public Transport have a journey planner on their website we used often in Malta to find which bus we needed.

Would you visit Mdina on a day trip? What would you most want to see? Looking for more tips on getting around Malta, what you should budget for Malta, and what to see? Check out my complete guide to Malta.

Food to try and places to eat in Prague

A Day Exploring the Giant’s Causeway

Valletta Malta - How to Spend 24 Hours