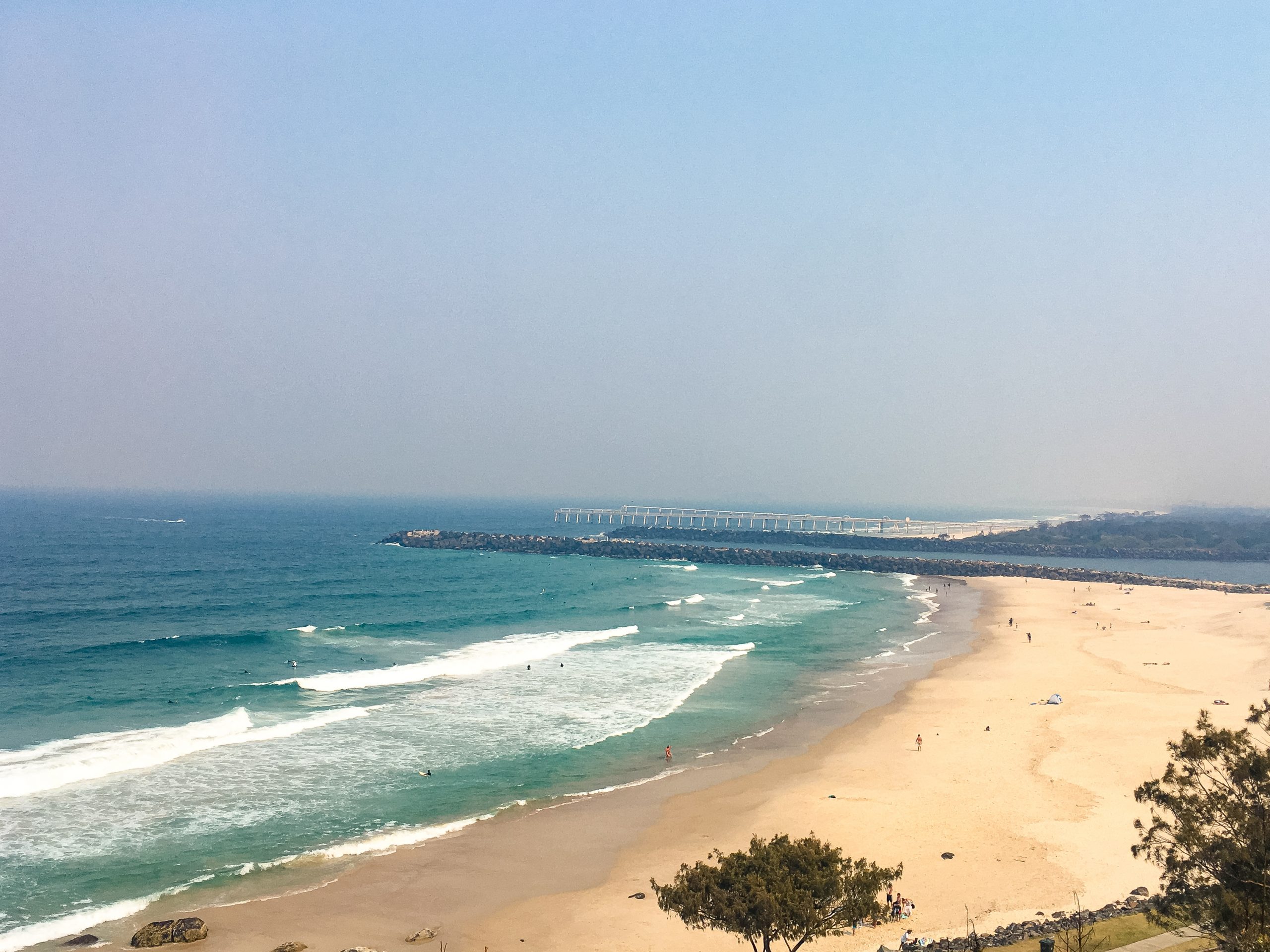 After a few days in Brisbane, I left Queensland’s capital behind and headed south in search of beautiful beaches. The Gold Coast stretches just south of Brisbane from Surfer’s Paradise, the metropolitan area Gold Coast, down through Currumbin and ending at the border between Coolangatta and Tweeds Heads. I skipped the first part of the coast. It was far too touristy for my taste, too many resorts and theme parks. The whole area is popular with both Australians and tourists from farther abroad, and it’s not hard to see why. I concentrated my time in the southern suburbs of the 70km of coastline.

I spent the next few days exploring the area between Currumbin and Tweed Heads. And the beaches were perfection. I rate every beach I come across on the gold standard that is the place I grew up, the Outer Banks of North Carolina. And I found the one place out of everywhere I’ve been where the beaches not only lived up to it, I think they surpassed it. There’s such a laid back vibe here and I felt so at home. I could have easily spent my days just drifting through the streets of the towns and along the beaches.

From coastal walks and watersports to getting close up to Australia’s native animals, or just spending a few days lazing by the sea, there’s plenty of reasons to add the Gold Coast to your Australia itinerary.

Disclosure: Some of the links in this post are affiliate links, and at no additional cost to you, I earn a commission if you make a purchase.

Hopping between Tweed Heads and Coolangatta, I spent the entire time having no idea what time of day it was. The line between New South Wales and Queensland is marked on the pavement, but my phone didn’t know that. The clock spent the entire day flipping back and forth between the two time zones.

My favourite thing I did on the Gold Coast was spend the morning in Tweed Heads stand-up paddle (SUP) boarding. I’ve gone paddle boarding a few times on holiday before but this was probably my favourite time. I headed down to Jack Evan’s Boat dock and met up with Big Trev who rents SUP gear out of a yellow van.

I can’t recommend renting a board for a few hours while you’re here enough, and this is the perfect place to try it for the first time. Big Trev is a laid back and good teacher, I feel like my SUP form is better now thanks to his tips. You start off with feeding the fish in the bay, followed by a quick tutorial, and then a couple of hours of paddle boarding bliss.

The few hours were just so laid back and relaxing, exploring the boat harbour, looking at the fish and stingrays swimming under my board, keeping an eye out for a turtle that supposedly hangs out in the harbour (although I never did find her). I even tried a bit of SUP yoga. He also rents pedalos if you just want to paddle around and it’s one of the most reasonably priced board rentals I’ve found yet while travelling.

Elsewhere, you can try surfing at various spots along the coast, there’s plenty of great spots for beginners and more experienced borders alike. If you are a first timer, you can book a surf lesson.

I spent one day making my way along the coast from Tweed Heads back to my accommodation, stopping off at all the beaches to check them all out. Starting at Jack Evans Boat Harbour after my paddle boarding session, I made my way north along the coast. After Duranbah Beach, I hiked up to Point Danger and along the coastal walk past Snapper’s Rock and the Captain Cook Memorial Light before ending up back at the beach at Rainbow Bay.

The main beaches in this area that I visited from North to South are:

Shopping on the Gold Coast

If you’re after surf brands (perhaps even a board?), head into the big Kirra Surf shop. The shop is huge. I spent my years on the beach wearing all the brands in this shop, so I was loving it. There’s also a decent sized mall in Tweed Heads. Further north, the main drag (The Strand) in Coolangatta is lined with all sorts of shops selling tourist wares and flowy beach clothing.

Currumbin Wildlife Sanctuary is a great place to see some of Australia’s native animals as well as a few from further afield. Stop by the huge sanctuary to see koalas, kangaroos, crocodiles, echidnas and more.

Local restaurants on the Gold Coast I recommend

Selfish – A little fish and chip spot near the boat harbour I stopped in after paddle boarding. I ordered crumbed barramundi and chips, washed down with a Bundaberg ginger beer. You can find plenty of spots outside to enjoy views of the boat harbour.

Elephant Rock Cafe – There’s a lot of cute brunch spots along the main front. I popped into this one, grabbed a seat with a sea view and had an Aussie staple – fresh banana bread. This cafe serves it with a carmelised banana and whipped brown butter.

Tips for visiting the Gold Coast

Getting to the Gold Coast

It’s easy to reach the Gold Coast by car. From Brisbane it’s a bit over an hour. However, I travelled around Australia’s East Coast without a car, so I relied mainly on Greyhound buses and local transport. Following my stay in Brisbane, I travelled to Coolangatta in just an hour and twenty minutes on a Greyhound Bus.

Gold Coast Airport is located in Bilinga, with domestic flights from Sydney, Melbourne and Adelaide as well as international destinations.

Getting around the Gold Coast (without a car)

There’s a bus that runs from Currumbin to Tweed Heads and it’s fairly cheap. Route 700 runs pretty much the length of the Gold Coast and leaves frequently. I pretty much used this and walked. It just goes straight down the coast so it’s difficult to get lost and its easy to get off at one of the many beaches.

Where to stay on the Gold Coast

I’m not sure you can go wrong where you stay along this area. I was in an Airbnb in Tugun, which was peaceful and quiet but shops and restaurants nearby. Coolangatta is a solid choice, there’s lots around to keep you entertained. Or if you like a bit more action, you could choose something closer to Surfer’s Paradise.

24 Hours in Singapore – The Perfect Layover