9 quirky things to see in Prague 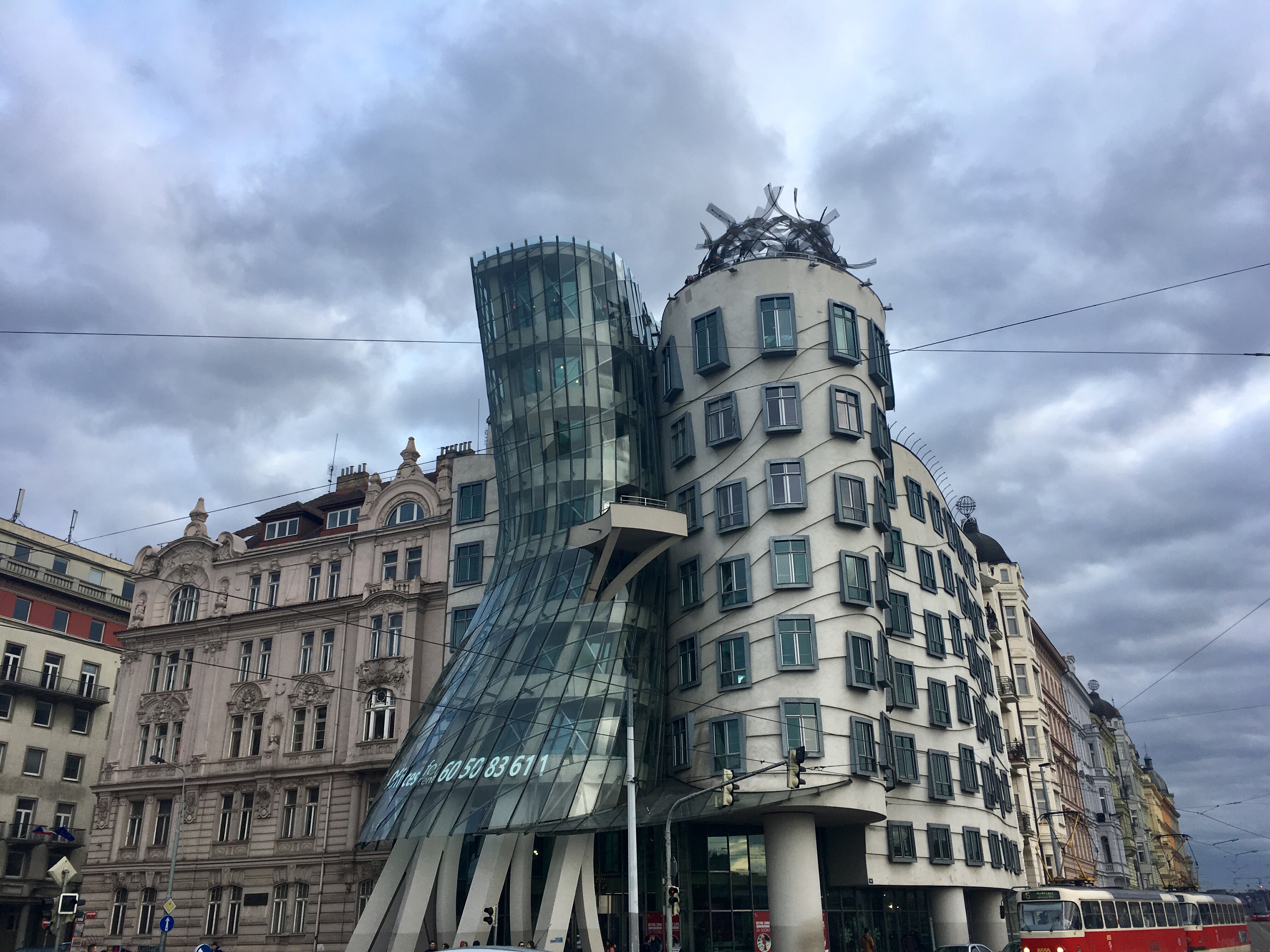 Prague is an incredibly beautiful city, filled with a myriad of historical sites and eye-catching architecture. But some of its attractions and sights are in the side of amusing, unique and odd. Here’s my recommendations of fun, quirky, and unusual things to see in Prague:

Among Prague’s many spires, pretty pastel buildings, and hundreds of years of architectural styles is this modern bit of quirky architecture. The dancing house is also known as Fred and Ginger, as a nod to old Hollywood. Twisting and curving upward, it’s a fun one to see.

The narrowest street in Prague

This quirky little street leads to a restaurant at the bottom of the steps and only one person can pass through at a time. The street even features a little traffic light so you don’t get stuck at the bottom.

This wall is located in Malá Strana and is the only legal place to graffiti in Prague. The Lennon Wall sprung up shortly after John Lennon’s death in 1980 featuring Beatles lyric. Visitors and passerby’s have covered the wall in decades of multicoloured paint and scribbles over the years.

The Piss statue depicts two men weeing in a pond shaped like the Czech Republic. It’s odd modern art on the surface but has undertones of Czech humour, in part representing the invasions of the country over the years. Apparently, you can send a text that makes the sculptures write letters in the water. Prague’s sites don’t get quirkier than this.

The Czechs seem to have a self-deprecating sense of humour, after all, they boost their capital is home to the world’s second ugliest building, Zizkov Tower. The TV tower sticks out among the rest of Prague’s stunning buildings, especially as it’s one of the tallest buildings in the city. The tower has a viewing platform and restaurants towards the top, which one Prague resident recommended to me because “you get all the nice pictures without the ugly building in it.”

I didn’t personally have time to track this one down, but the statue depicts King Wenceslas on top of an upside horse suspended from the ceiling of the Art Nouveau Lucerna Palace. As you might have guessed by its oddness, it’s a creation from David Cerny. It is meant as a mocking tribute to the past and present leadership of the Czech Republic.

Another one from the mind of David Cerny is the unnerving crawling babies statues. I saw these and had a lot of questions, like “what exactly is it supposed to represent?” And “where are their faces and what is that in its place?” I can’t tell you that, but I can tell you that you can see them for yourself at Kampa Park and Garden in Mala Strana or crawling up the Zizkov Tower.

The second most disappointing tourist attraction

In the official ranking of tourist attractions that you walk away from thinking “why did I waste my time and fight the crowds for that?”, the Mona Lisa at the Louvre in Paris tops the list. But one of Prague’s attractions comes second: the Astronomical Clock show.

The clock itself is an incredible piece of art that I kept staring at every time I passed it. But just before the chiming of every hour a crowd forms to watch the show. Five minutes later you can see them walking away with bemused “was that it?” expressions. I skipped seeing it myself, steering clear if it was five minutes to the hour, mainly as I found a YouTube video of it before. Yeah, I can see why. But don’t skip seeing the clock itself, the intricate design is stunning! Or stick around to see how it measures up to your expectations!

My thoughts on many of the museums in Prague was “what could possibly be in there and why is there a whole museum dedicated to it?” Curiosity got the better of you? Feel free to check out the likes of the Apple Museum (as in iPhone not fruit), Sex Machines Museum, Museum of Alchemy, Museum of Historical Chamber Pots and Toilets, and Lego Museum, amongst others.

Looking for more advice for visiting Prague? Check out my other guides:

Food and Drink to Try in Belgium