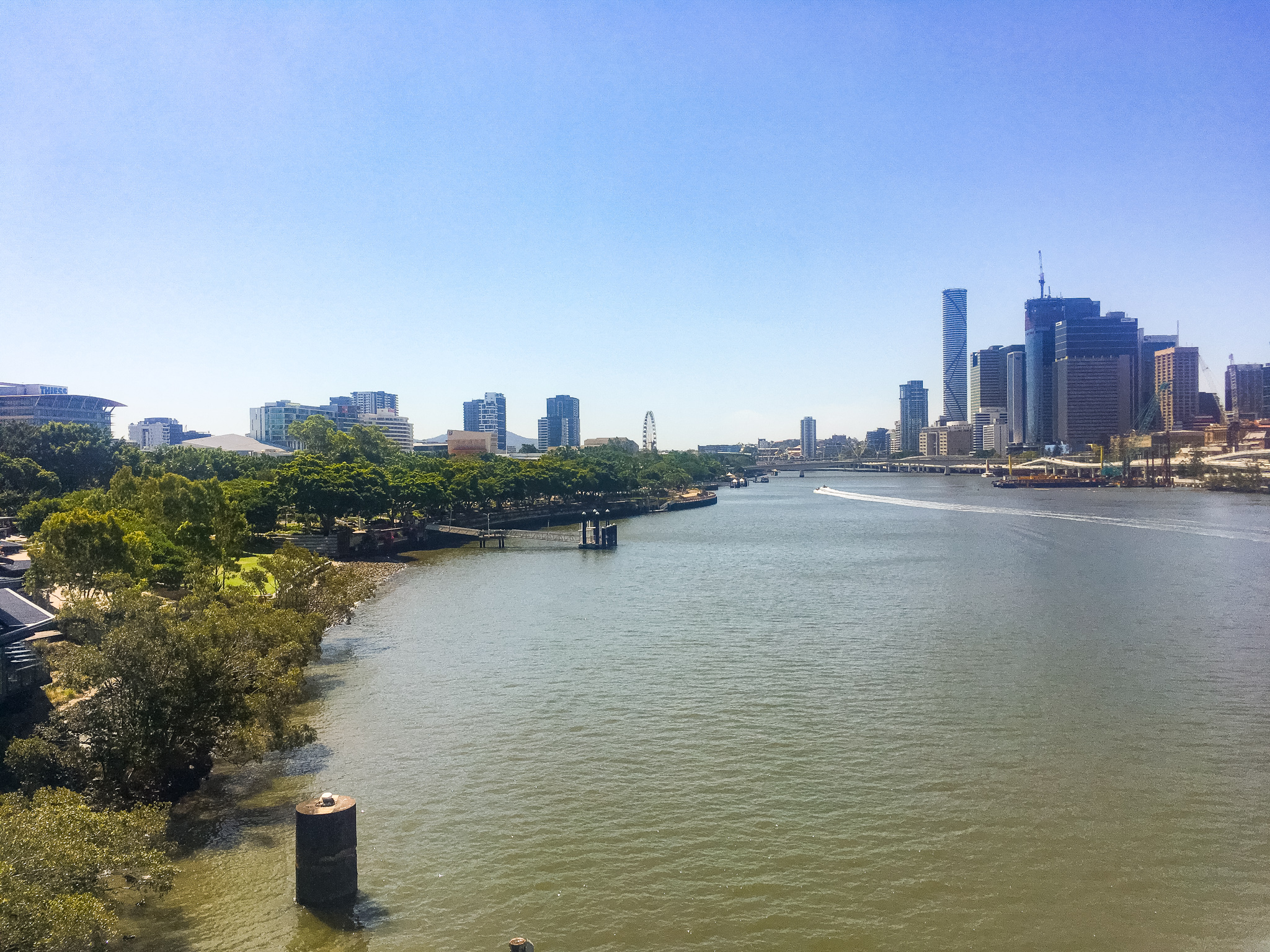 Brisbane was a really special place for me to visit. My mom grew up on the outskirts of Brisbane and I was looking forward to finally seeing a place I’d heard about since I was a kid. I decided to spend about 48 hours in Brisbane Australia exploring and visiting with family.

I arrived off an 8-hour flight from Singapore, part of which I spent looking at the window as the plane passed over the reddish desert below. After getting my Aussie SIM card, I boarded a train from the airport to Roma Street. Stepping out of the station, the smell of Jacaranda blossoms hung in the balmy air. I had finally made it to Australia.

The next morning I headed off on a tour of the southern Great Barrier Reef for a few days before pulling back into the bus station near Roma Street. I spent the next couple of days based in nearby Ipswich taking day trips into town and around the surrounding area.

Disclosure: Some of the links in this post are affiliate links, and at no additional cost to you, I earn a commission if you make a purchase.

For me, the choice to visit Brisbane was a personal one, not just because my mom grew up near Brisbane, but also as I have family that live about half an hour out of the city. I actually spent a little longer than 48 hours in Brisbane but part of that was relaxing and visiting family.

It is easier to see the highlights of Brisbane in about 48 hours than some other cities on Australia’s east coast. However, although it isn’t as talked about as larger Sydney and Melbourne, it doesn’t mean you should skip it.

Brisbane is the capital of the territory Queensland and the third biggest city in Australia. It has a subtropical climate meaning it stays warm most of the year and gets a lot of sunshine. It reached 38 degrees when I visited in spring (2nd week of November) but I’m told that isn’t the norm. The city itself has laid back vibes and is centred around the river.

Brisbane, Sydney and Melbourne all have their own travel card, which you will need to get around the cities’ public transport. In Brisbane, you travel by Go Card. Buses seem to be the main way to get around the City centre (CBD), while trains run along suburban routes.

I spent the majority of my time staying with family in Ipswich and travelling into Brisbane. I wouldn’t recommend staying somewhere like Ipswich unless you are renting a car. My first night, I stayed at the Metropolitan in Spring Hill, which was basic but cheap and cheerful and actually the downstairs cafe was surprisingly nice. I’d recommend the area as it’s quite central. If I was staying in the city for a few days, I’d probably pick somewhere on the South Bank as I just really liked the area and there’s so many restaurants around. Look for accommodation nearby here. On my first night I stayed in Spring Hill and really liked the area, which you can find places to stay here. Or search for all Brisbane accommodation.

How to spend 48 hours in Brisbane

Day one of 48 hours in Brisbane

I caught the train from Ipswich to Brisbane Central and set off exploring the city. First stop was South Banks Parklands, an area full of green (and blue!) spaces, nice places to eat, and has arisen as Brisbane’s cultural hub. It’s a pretty modern area (certainly built after my mom moved away) and actually you could easily just spend a day walking around and relaxing. Especially when there’s a faux beach calling your name.

What other city can you escape the heat at a man-made beach with a huge pool? Streets Beach is situated in South Banks Parklands and was an absolute lifesaver during the 38 degree heat when I was there. Not only can you use it for free, but the views out over the river are gorgeous and the pool is equal to five Olympic swimming pools. So you’ll find plenty of space to cool off. I’d imagine it gets pretty crowded on weekends but was certainly not too bad at lunch time on a Friday. I managed to find a spot to pitch my towel and felt like I almost had the deeper part of the pool to myself.

After a lovely swim and some sunbathing on the sand, it was time for lunch. The South Bank had plenty of street food style eateries that I couldn’t wait to pick from. I stopped for some tacos before exploring around the rest of the South Bank Parklands including a Nepalese Pagoda, a rainforest walk, the Wheel of Brisbane, the bougainvillea covered Arbour, and more.

Brisbane is nicknamed the River City, which runs through the centre. And like all cities centred around a river, it has a particularly famous Bridge. Storey Bridge dates back to the 1930’s. It links the CBD with inner city suburb Kangaroo Island and is one of Brisbane’s most famous landmarks. Like Sydney Harbour Bridge, you can sign up to climb it, offering a bird’s eye of the city.

It was also one of the few places that I visited that had remained unchanged from when my mom lived there and that she recognised easily from my photos. After crossing over the Goodwill Bridge, I took a walk along the riverside in the Botanic Gardens. It was a really peaceful place to explore, from its ornamental ponds to the riverside walk. You can find a guide to a self-guided walk of the gardens here.

Oh one thing you’ll find everywhere in Australia are water dragons. They like to hang out in the urban parks. Unlike pretty much everything else in Australia, they are harmless and will leave you alone if you leave them alone. They don’t seem to mind photos though!

Queens Street is the main shopping hub in Brisbane. Walking down Adelaide Street and Edward Street, particularly in QueensPlaza Arcade, you’ll find luxury shops from Tiffany & Co. to Dior Queens Street is full of high street favourites. While a few shops were the same as in the UK, the shops were selling my favourite season for fashion, spring, so I browsed all the sundresses as a welcome break from all the jumpers back home!

I only spent one full day in Brisbane itself and the rest was dedicated to surrounding areas. Here’s some places to explore while staying in Brisbane.

I was mainly visiting cities/major towns during my time in Australia due to a lack of a car. For me, the best way to see each and every one of Australia’s unique wildlife was to visit Australia’s zoos, sanctuaries and wildlife parks.

Lone Pine Koala Sanctuary is the oldest and largest koala sanctuary, dating back to to 1927. You won’t just find koalas here though. The park is home to 70 different native species including wombats, emus, wallabies, tasmanian devils, dingos, native birds and my absolute favourite, platypus. It was a hot day when I visited so most of the animals were relaxing in the shade or hiding in their dens.

There’s a few ways to get to Lone Pine Koala Sanctuary. I went with my cousin by car. But you can also get there by bus, either the 430 from Queen Street Station or the 445 from Stop 41, Adelaide Street. Or you can reach it by river cruise.

Brisbane is also just a short way away from some of Australia’s most incredible beaches and are easy to get to by car or by bus or train. You can get a direct bus between Brisbane and Surfer’s Paradise in about 1 hour and 25 minutes to spend the afternoon.

If you want the best beaches, keep going further south. Tweed Heads, Currumbin, and Coolangatta are incredible and a lot less built up than those closer to Brisbane. Direct Greyhound buses run from Brisbane and Surfer’s paradise and Coolangatta, which I used to get there. Once you arrive, you can easily explore the nearby beaches by local bus.

Exploring the Sunshine Coast from Brisbane

To the north of Brisbane, you’ll find the sunshine coast, another area world-renown for its beach and stunning coastline. I can’t actually compare the two as I saw very little of the sunshine coast, mainly passing through on my way to the Great Barrier Reef. However, it’s an area I was sad to have missed and it’s very high on my list next time I’m in Australia.

Have more time in Brisbane?

You won’t run out of things to do. Here’s a few more ideas to add to your itinerary:

So that pretty much sums up my 48 hours in Brisbane before heading off to the Gold Coast. Have you visited this laid-back city? If not, what would you most want to do there?

Valletta Malta – How to Spend 24 Hours

What to Know Before Visiting Vatican City

How to Make Vietnamese Coffee - Taste of Travel